You make the batter for the pumpkin cakes by hand by combining all of the wet ingredients (dark brown sugar, vegetable oil, chilled pumpkin puree, eggs, and vanilla) in one bowl, all of the dry ingredients (flour, salt, baking powder, baking soda, cinnamon, ginger, and cloves) in another, and then mixing the dry into the wet. It should be easy, but I had a problem with my dark brown sugar, which was full of countless tiny pebbles of hardened sugar that I had to break up one by one between my fingers. And I was nervous about the amount of spice included in the cake batter -- a whole quarter cup! Adding two tablespoons of cinnamon, a tablespoon of ground ginger, and a tablespoon of cloves to the batter seemed slightly insane. But I went with it.

I wanted smaller whoopie pies so I used a #40 scoop to portion out of the dough; I ended up with enough little cakes to make 26 assembled pies (the recipe is written to make 12 large whoopie pies). The baked cakes were tall domes with cracked tops. The headnote indicates that using chilled pumpkin puree is necessary to give the cakes a domed top, so I put my cans of pumpkin puree in the fridge a day ahead of time and also kept the batter in the fridge while I was waiting to scoop and bake more cakes (I only baked one pan of cakes at a time). These are definitely the most rotund whoopie pie cakes I have ever baked. 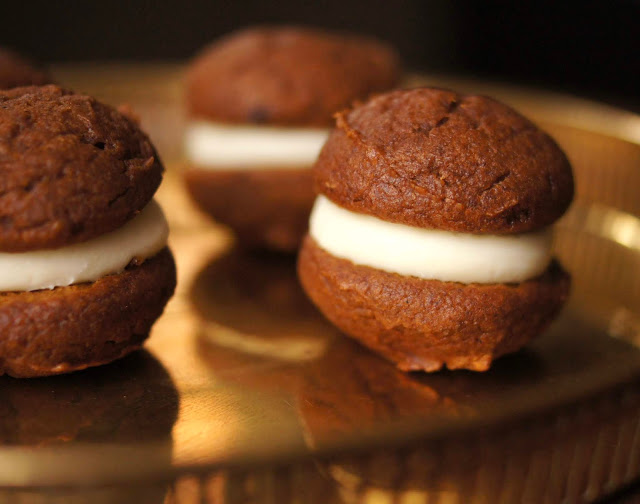 The filling is just a mixture of powdered sugar, softened butter, softened cream cheese, and vanilla. I used a #50 scoop to portion out the filling (I first tried a #40 scoop and it was too much). I had enough filling to fill the pies, with a little left over. I stored the assembled whoopie pies on a parchment-lined sheet pan in the fridge.

The cakes were soft and became slightly tacky to the touch after being chilled; parchment paper was definitely necessary for storage and transport. The amount of spice turned out to be just fine, and the cakes tasted good -- but I didn't think the cakes were all that great plain and they definitely needed the luscious cream cheese filling. The assembled whoopie pies were delicious, even straight from the fridge. I actually wished that the cakes had been a little flatter -- I ended up with a bit of a Weeble wobble problem where many of my assembled whoopie pies wouldn't stand up straight. Still, they were pretty darn cute!