September 08, 2019
I'm going rogue this week for Baked Sunday Mornings, and in fact, I'm going right back to where I first started from. (The Green Tea Smoothie is on the schedule this week; I made it back in January and you can read my post about it here.) My husband gave me a copy of Baked: New Frontiers in Baking for Christmas in 2008 and the first recipe I tried from the book was the Peanut Butter Crispy Bars; I blogged about the recipe in early 2009. And now, more than ten years and roughly 275 recipes later, I've almost finished baking all of the recipes from all four Baked cookbooks.

The Peanut Butter Crispy Bars are delicious and relatively easy to make. I thought it would be worthwhile to revisit the recipe since it's been so long so I first tried it. The bars are essentially Rice Krispies treats covered in a layer of creamy peanut butter and milk chocolate, topped with dark chocolate. You don't need to turn on the oven to make them, but you do need a candy thermometer. Plus, you'll dirty a saucepan and several bowls.

The coating for the Rice Krispies cereal isn't melted marshmallows, but a homemade candy mixture made by cooking sugar, water, and corn syrup to 235 degrees, and adding butter. You coat the cereal with the sugar mixture and press it into an 8-inch buttered pan (I lined mine with parchment paper to make things easier). Back in 2009, I had too much sugar mixture for the cereal, but this time I had the perfect amount. 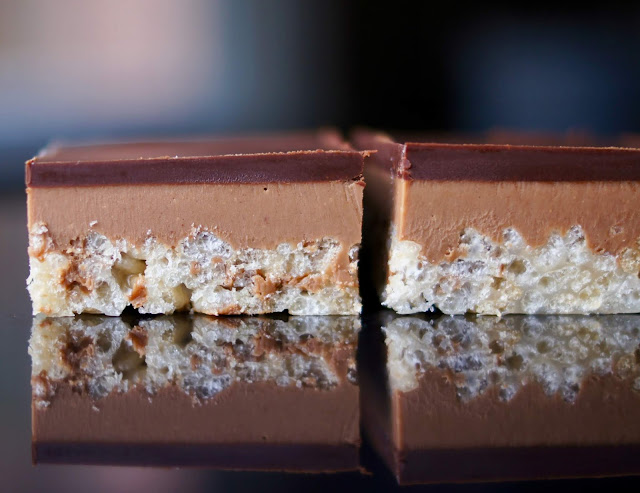 These bars are freakin' delicious. The crunch of the bottom cereal layer contrasts so nicely with the smooth and rich peanut butter-milk chocolate layer. I don't actually think the top dark chocolate layer is necessary, but I'm not complaining about it. The bars tasted wonderful straight out of the fridge; the chocolate layers remained creamy. The candied Rice Krispies don't have the stretch and chew of a traditional Rice Krispies treat made with marshmallows. This version is more crisp, which I think works well with the thick layer of peanut butter and chocolate. If anything, I wished the layer of Rice Krispies was a little thicker. Also, I couldn't help wondering how these bars would taste with some salted peanuts incorporated into the bottom layer.

But there is no need to change up the recipe in any way. I absolutely love these bars just the way they are.