May 19, 2019
The recipe on the schedule this week for Baked Sunday Mornings is Honeycomb Bars, a confection with a sweet buttery crust and a filling made with honey, dried cherries, candied orange peel, and almonds. I made these bars a few years ago and thought they were terrific -- you can read my blog post about them here. Instead of making the Honeycomb Bars again, I went rogue this week and made the S'more Nut Bars from Baked: New Frontiers in Baking instead. (I've been going rogue a lot lately and this will continue until we finish up New Frontiers -- by my rough count there are about two dozen recipes left until we finish the cookbook and I've already made about two-thirds of them.)

The S'more Nut Bars have a graham cracker crust topped with a mixture of chocolate, peanuts, and marshmallows. They are super easy to make. The crust is a mixture of graham cracker crumbs (I used 250 grams), dark brown sugar and melted butter. I pressed the mixture into the bottom of a parchment-lined 9-inch by 13-inch pan and baked it until golden. To make the filling, you bring heavy cream to a boil and pour it over a mixture of milk chocolate, dark chocolate, and a little corn syrup. You whisk the chocolate mixture until smooth and then fold in marshmallows and lightly salted peanuts. After spreading the filling over the crust, you sprinkle on chopped peanuts and put the bars in the fridge to set. 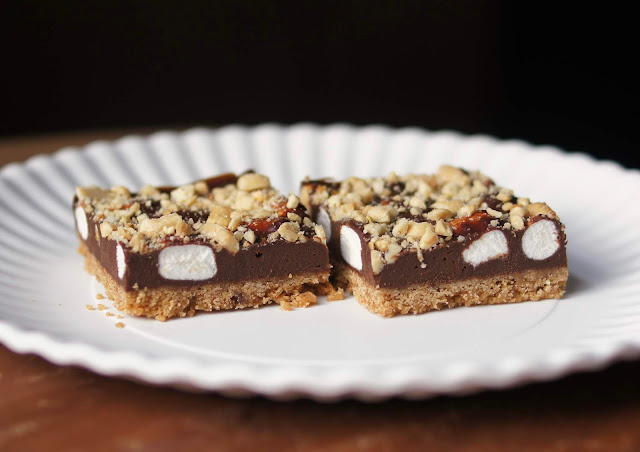 I chilled the bars overnight before cutting them. The graham cracker crust crumbled a bit as I sliced the bars and in the photo above you can see how the edges of the bars are not entirely intact. The bars sliced easily, even straight out of the fridge; the chocolate was firm but creamy. I was not expecting these bars to be anything special, but they were amazing. Eating a piece was like eating a decadent candy bar with lots of interesting mix-ins. I suspect the primary reason these bars tasted so good was that I used high-quality couverture chocolate -- but what's not to like about graham crackers, chocolate, marshmallows, and peanuts?

The bars were a huge hit with my tasters and after Tom and I ate the two pieces I had saved for us, we were both bummed that we didn't have any more. I would happily eat a pan of these, any day.