August 08, 2019
Sometimes I don't have any specific baking plans and I just look for a recipe that's quick and easy. That's why I decided to make the Cinnamon Toast Bars that I found on Leite's Culinaria. The recipe is adapted from Fat Witch Bake Sale by Patricia Helding, which did give me slight pause. I had a copy (actually, two copies) of Fat Witch Brownies that I donated to charity after being disappointed with the recipes. But the positive reviews from recipe testers for the cinnamon toast bars made me optimistic.

The recipe is written to be baked in a 9-inch square pan but I multiplied it by 1.5 and baked it in a 9-inch by 13-inch pan. It only take a few minutes to make the batter. You beat softened butter with brown sugar and granulated sugar; beat in eggs and vanilla; and mix in flour, baking powder, salt, and cinnamon. I spread the batter into the parchment-lined pan; baked the bars until golden; and cooled them completely before slicing. 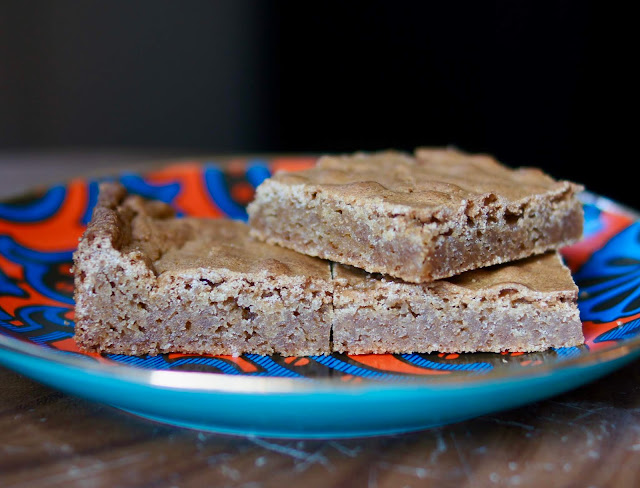 The bars were thin and flat, except for a distinct raised lip around the edges. I really liked these bars. Because the primary flavors are sugar and cinnamon, they do evoke the flavor of cinnamon toast. And the texture was nice and chewy, although my favorite parts were the well-done edges. I think these bars would be better if they were a little thicker, but I'm not complaining. I wouldn't say that these bars are a standout, but they were quite good.