August 26, 2018
The recipe on today's Baked Sunday Mornings schedule is Brewer's Blondies, blondies made with both malted milk powder and crushed malt balls. I made these blondies back in 2013 and was a little disappointed in the lack of malt flavor in the finished product. So this time I upped the malt content by increasing the amount of malt powder by 50% and keeping the malt balls in large pieces (I halved Whoppers before adding them into the batter).

This recipe is straightforward. You beat softened butter and dark brown sugar; add eggs and vanilla; incorporate the dry ingredients (flour, baking powder, salt, and malted milk powder); and stir in chopped malt balls, chocolate chips, and chopped toasted walnuts. I spread the thick batter into an even layer in a parchment-lined 9-inch by 13-inch pan to bake. 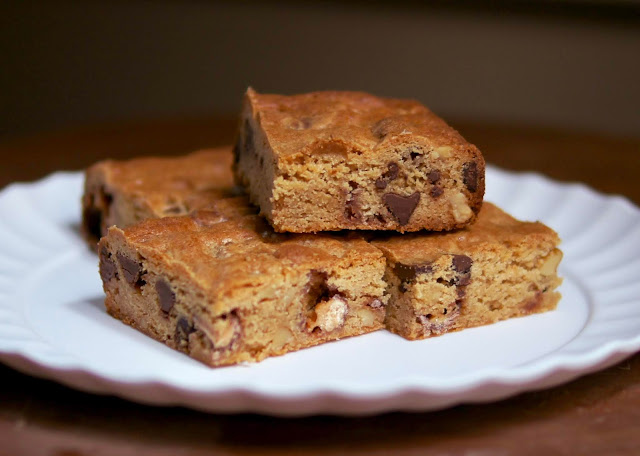 The blondies turned out dark golden brown, with a perfectly level surface. I don't have a specific recollection of how these bars tasted when I first made them five years ago, but this time around I was happy with the level of malt flavor -- it was distinct but not overwhelming. The bars had a very chewy, satisfying texture. I was glad that I had left the malt balls in large pieces because they yielded an audible and sharp crunch. Because there are so many other mix-ins in these bars -- the chocolate chips and the walnuts -- the malt flavor stays in the background. But whether you're looking for malt or not, these blondies are delicious.