July 02, 2017
I had to read through this week's Baked Sunday Mornings recipe a few times before I made it. The Hot Chocolate Pudding Cake recipe seemed so odd and I wanted to make sure that I wasn't misreading it. I've made bars with custard on the bottom and cake on top before -- although those recipes were mixed as a single batter that separated out into the two distinct layers during baking. This dessert is composed of multiple layers that don't seem like they should bake into a cake.

The bottom layer is a mixture of melted butter, melted bittersweet chocolate, cocoa, brown sugar, vanilla, buttermilk, egg yolks, canola oil, flour, baking powder, baking soda, and salt. I scraped it into the bottom of a 8-inch parchment-lined pan and spread it out into a thin, even layer. I scattered dark bittersweet chocolate chips on top of the batter, followed by a mixture of granulated sugar, dark brown sugar and cocoa powder. The sugar-cocoa mixture looked like a thick layer of sand. The final step was to pour on a mixture of instant espresso powder dissolved in boiling water, and a layer of murky liquid remained on top of the cake as I put the pan into the oven. 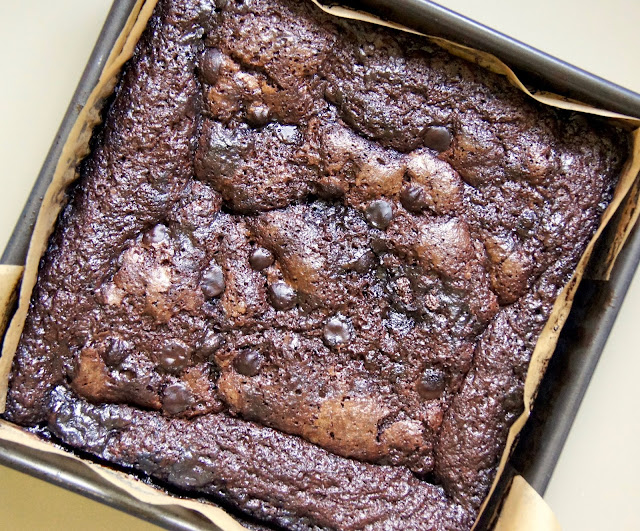 The baked cake basically looked like a brownie, with some chocolate chips visible on top. I took the cake to a brunch with my cousins while it was still warm. It was difficult to get slices out of the pan. The bottom of the cake didn't look so much like pudding as it did undercooked cake; I think I may have overbaked it. My cousin Cindy had the good idea of adding some berries from the brunch offerings and praised the combination, adding that the cake and berries were particularly good with coffee. 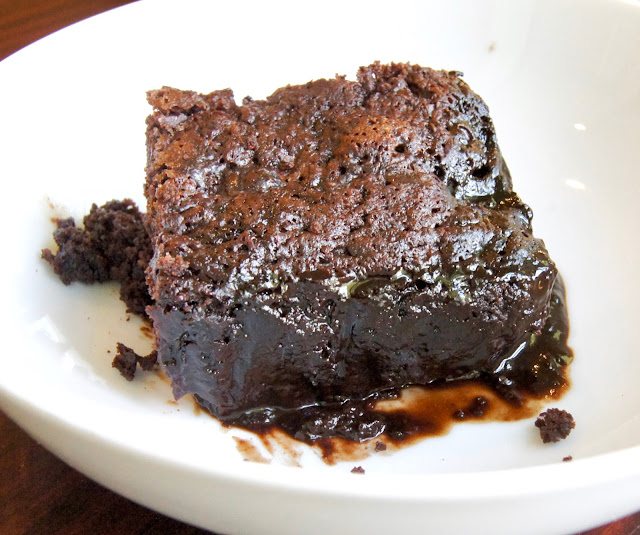 I thought this cake tasted great -- it was deeply chocolate-y and not too sweet. I wasn't in love with the texture, though. I think I would have liked the pudding layer to be more pudding-like or sauce-like, instead of seeming more like an underdone cake. I agree with the gentlemen bakers that a side of vanilla ice cream would be a great accompaniment. But I think that I would just prefer enjoy these flavors in a chocolate cake or brownie. I love chocolate pudding, but this cake didn't read like chocolate pudding at all to me.