December 18, 2016
I was not that excited about this week's Baked Sunday Mornings recipe, an Orange Pineapple Walnut Fruitcake. I have nothing against fruitcake per se -- but I do have something against boozy desserts. I'm a teetotaler who can't stand the taste of alcohol, and the recipe headnote's promise that "This is one boozy fruitcake" was distressing.

This recipe doesn't require an electric mixer, but it does require both a pot and a mixing bowl. The first step is to bring a mixture of diced dried pineapple, rum, and orange juice to a boil; then you add sugar and butter and simmer until you get a thick syrup. After the rum syrup has cooled, you whisk in the dry ingredients (flour, baking soda, and salt), followed by orange zest, eggs, an egg yolk, vanilla, and chopped toasted walnuts. I poured the batter into a parchment-lined loaf pan, baked it, and let it cool briefly before poking holes into the top of the cake and pouring rum over it. 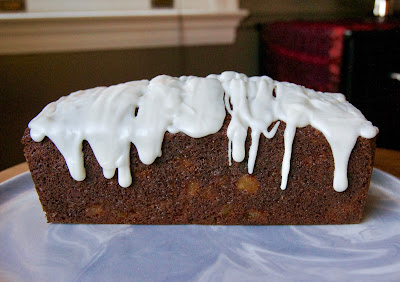 After a 24-hour wait, I unmolded the cake and applied a glaze of rum mixed with powdered sugar. My glaze was thin enough to pour, but thick enough to cling to the sides of the cake. When I cut the first slice off of the end of the loaf I was pleasantly surprised at how evenly the nuts and dried fruit were distributed throughout the cake. As I continued slicing, I quickly realized that only the end pieces of the loaf had even fruit distribution; in the remainder of the loaf, like the slices pictured below, the fruit and nuts were clustered along the sides and bottom. 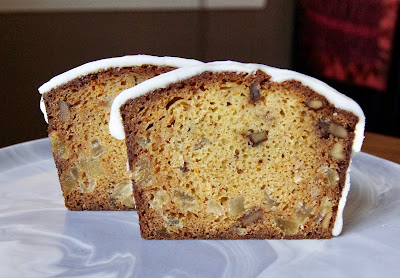 I enjoyed this fruitcake. To be more precise, I liked the bottom half of it, which was much less boozy than the top half. It probably helped that the part of the cake I was able to eat was full of fruit and nuts -- but if I didn't know that I had used pineapple, I'm not sure that I would have been able to identify exactly what sort of fruit it was. My husband Tom liked the whole cake, but was taken off guard by how boozy it was. Boozy or not, Tom and my other tasters really enjoyed the cake, so I consider this recipe a success -- even if I couldn't fully appreciate it.

Anonymous said…
I'm glad you were able to salvage some sort of positive outcome. I was not a fan, though I liked it this time better than when I tested this recipe. Happy Holidays!
December 19, 2016 at 2:10 AM 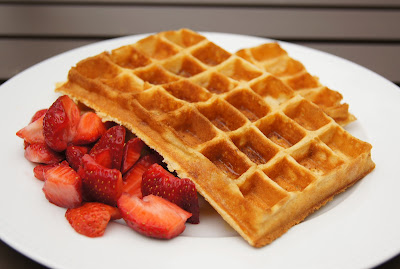 This week's assignment for Baked Sunday Mornings -- "Malted Waffles" -- posed a logistical problem for me, because I don't own a waffle iron. I used to have one, but I donated it to charity years ago because I used it so rarely. Fortunately, my friend Dorothy was kind enough to both lend me her Belgian waffle maker and bring her family over to sample the waffles. Making the waffle batter only takes a couple of minutes -- you just stir together the dry ingredients (flour, malt powder, brown sugar, baking powder, baking soda, salt), and then fold in the wet ingredients (eggs, melted butter, buttermilk). The waffle iron I used to own was quite rudimentary -- it didn't have any thermostat settings. Dorothy's is a bit more advanced. It has six heat settings, and I wasn't sure which one to use. I consulted the instruction manual, which said to set the thermostat "as required for the recipe" and to cook the waffles "for the time indicated in the