July 15, 2012
Earlier this week I asked my friend Dorothy if she might be able to bring her sons by to sample this week's Baked Sunday Mornings Assignment, Simple Blueberry Parfaits. When I described the dessert to her (vanilla wafer crumbs layered with blueberries and whipped cream), she was a bit perplexed. Is there any baking involved? Did I at least have to make my own vanilla wafers? She thought the parfaits seemed quite uncharacteristic of the recipes from Baked Explorations, many of which are quite elaborate. She's right; this is definitely one of the easiest recipes from the cookbook. But is is slightly more complicated that you might imagine looking at the end product; while it doesn't require turning on the oven, it does require using a food processor, stove, and electric mixer. 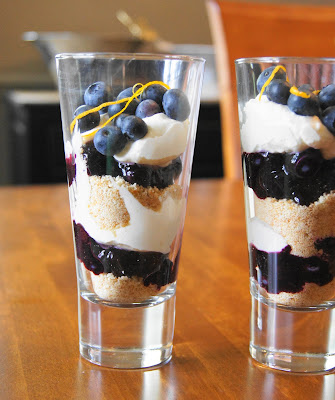 The only glasses I had that were appropriate for serving these parfaits were fairly narrow highballs. It was difficult to keep the sides of the glasses clean as I was assembling them; if I was really trying to make these look nice, I would probably put the whipped cream in a piping bag to have more control over where it went.

And the verdict?  Dorothy's younger son eagerly ate his entire parfait, while older son Alexander -- not particularly a fan of dessert in general -- thought that there was too much whipped cream and gave up after a few bites. However, all of the adults thought that these were delicious. There are no surprises here, but it's really hard to go wrong with cookies, blueberries, and whipped cream. In particular, I like the fact that the whipped cream is just barely sweetened. I will mention that I used about five ounces of vanilla wafers and I ended up with way too many crumbs. I also used just a splash of Grand Marnier in the sauce instead of the quarter cup the recipe calls for, and the sauce turned out fine.

This is a WYSIWYG dessert (What You See Is What You Get), but there's absolutely nothing wrong with that!

Susan said…
LOL! I don't thinks there's any such thing as "too much whipped cream"! We loved these, too & I agree - a nice change of pace.

Virginia Taylors said…
Your write up is wonderful...and I love having taste testers over when I make things also!
Great photo.
July 16, 2012 at 12:21 AM