October 22, 2009
Tom and I have a Sunday-only subscription to the Washington Post. To be honest, most of the newspaper goes straight into the recycling bin, because I find it a lot easier to read the paper on-line -- and that's exactly why we don't subscribe during the rest of the week. But the reason we get home delivery on Sunday is because of the plastic bag that comes bundled along with the newspaper, filled with the Washington Post Magazine, Parade Magazine, and all of the coupons and ads. I like to do the Post Magazine crossword and read Post critic Tom Sietsema's restaurant reviews. Usually I read Parade just for the ads. As my job involves advertising regulation, I happen to be the kind of person who flips through Parade each week, looks at the entire SkyMall catalog whenever I fly, and watches infomercials for fun.

A few weeks ago, I noticed a recurring recipe column in Parade by Dorie Greenspan called 1-2-3 Bake. The recipes are very simple, only require a few ingredients, and take up just one tiny column in the magazine, so they're easy to miss! Normally I wouldn't clip recipes from a general interest magazine (yes, maybe I am a bit of a food snob, but I also already have more cookbooks and cooking magazines than I can shake a stick at, so why bother?), but Dorie Greenspan is no hack. I own a couple of her cookbooks and have a tremendous amount of respect for her as a baker. I figured that she wouldn't be contributing recipes to Parade unless they're worthwhile. 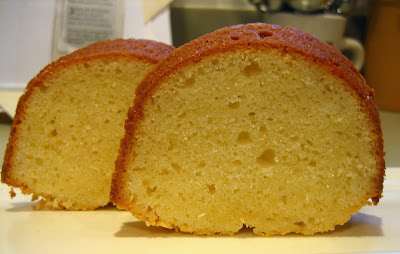 So I clipped her column from the October 11 magazine, which included a recipe for Sour Cream Bundt Cake. I can summarize the recipe in one sentence: cream together butter and sugar, beat in eggs, vanilla, and sour cream, mix in flour, baking powder and salt, and bake. The recipe also gave the option of adding some jam, but I decided to leave the batter plain.

This was a pretty little cake, moist and dense with a fine crumb. It was lightly sweet and slightly tangy, with a mild overall flavor. It's a nice little cake, although a bit on the boring side. As I ate a slice, I kept picturing in my mind how perfect this cake would be as a base for fruit sauce, ice cream, and/or whipped cream. Nothing fancy, but a solid performer.

I'm glad I discovered the 1-2-3 Bake recipe column -- one more thing to look forward to on Sunday mornings!