October 23, 2016
The gentlemen bakers from Baked have a strong brownie game. They have a terrific base brownie recipe ("The Baked Brownie") that they've adapted to several variations, my favorite of which is the sweet and salty brownie. This week's Baked Sunday Mornings recipe, "Milk Chocolate Malted Brownies with Chocolate Ganache," replaces some of the dark chocolate in the base brownie recipe with milk chocolate, adds malted milk powder, and includes a dark chocolate ganache topping.

I usually have Carnation malted milk powder on hand, but when I pulled the canister out of the cabinet I discovered that it was past its prime and the powder had congealed into a solid block. Fortunately, I still had some European Formula Ovaltine that I had purchased for another baking project, and I figured that I could just use that instead to get a similar, if possibly more chocolate-y, result.

To make these brownies you melt milk chocolate, dark chocolate, and butter in a double boiler; add brown sugar and granulated sugar; incorporate eggs and vanilla; and fold in the dry ingredients (flour, malted milk powder/Ovaltine, cocoa, and salt). I poured the batter into a parchment-lined pan, baked the brownies, and cooled them completely. 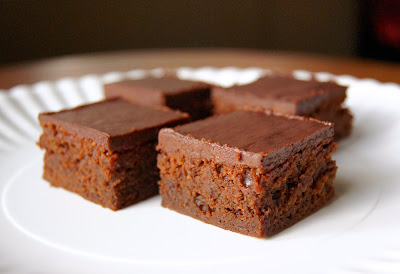 The recipe includes instructions to make royal icing to gussy up the brownies with Halloween-themed decorations, but I skipped this step. I made these brownies for a going-away party at work, so decorations weren't necessary. And these brownies really don't need any embellishment. They are delicious.

I generally am not a fan of brownies with frosting, but the thin layer of ganache on top was a perfect pairing with the fudgy brownie. I wouldn't say that the brownies tasted like Ovaltine, or even malt. But having tasted the plain version of these brownies, the Ovaltine version definitely tasted different -- more earthy, maybe? And even though I can't describe the flavor, I loved it. My husband declared these brownies to be as good as the sweet and salty brownies -- and that's pretty high praise, since it's hard to compete with salted caramel!

Littlebakerbunny said…
Thanks, Dafna! I think they only look tall because I cut the brownies into such small squares. :)
October 27, 2016 at 9:43 PM

Littlebakerbunny said…
Thanks! I'm slowly getting back into the kitchen... but it's been a long slog. I hope to be back to my normal baking schedule soon!
October 27, 2016 at 9:47 PM

Robyn said…
The only malt recipe I've made where you can taste the malt is the milkshake from Baked Elements, and I think that's because there was no chocolate in it. Chocolate always overpowers it!
November 5, 2016 at 11:49 AM