June 15, 2014
This week's Baked Sunday Mornings recipe is Turtle Thumbprint Cookies, a recipe I've made before. I didn't have time to make the cookies again this week, so I'm going to cheat and refer people back to my previous post about the recipe, which is located here. 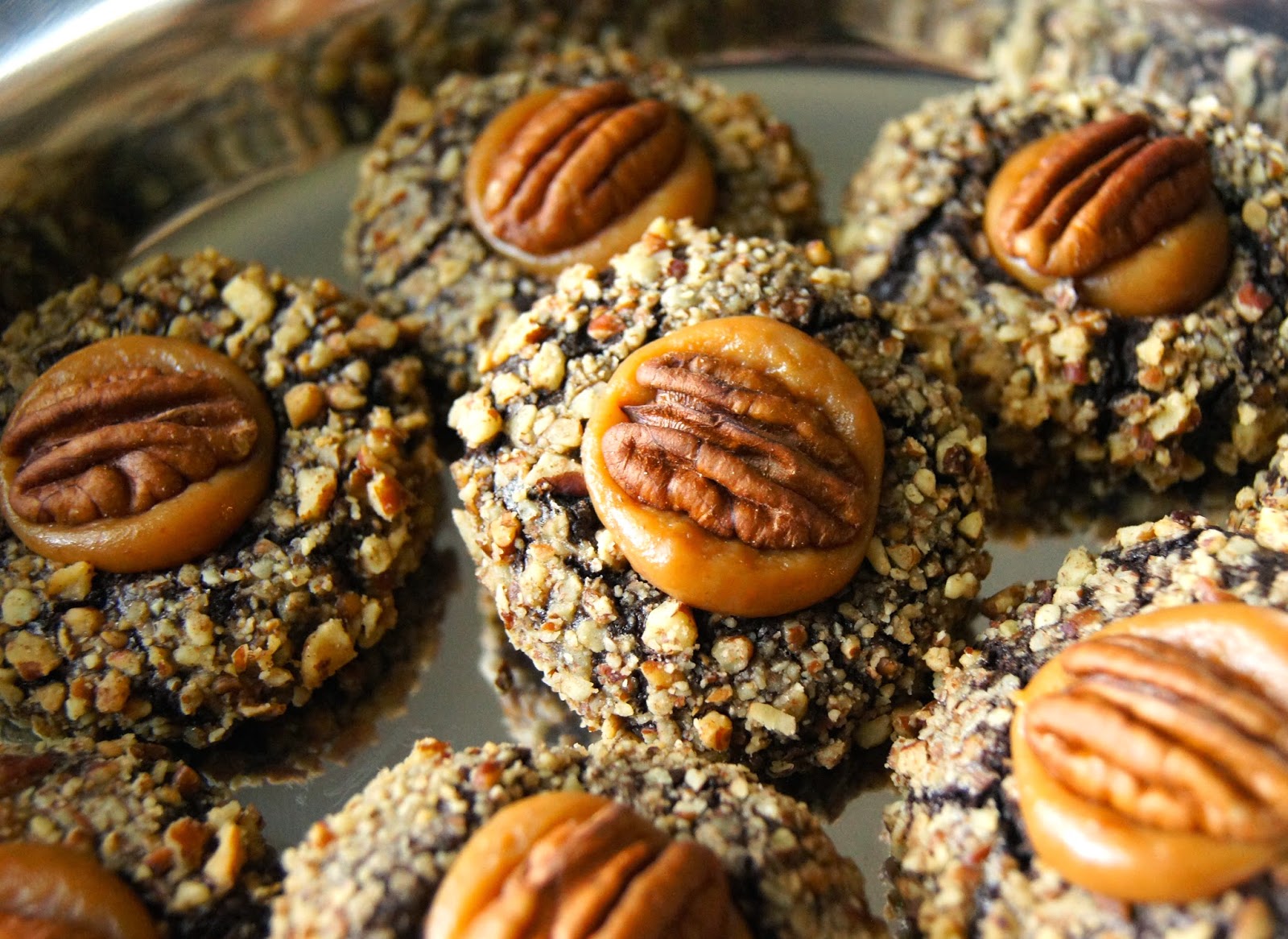 Have Apron....Will Bake said…
Lucky you, already making them! I did enjoy them. Love the combination of flavours. I decided to be cautious, and slightly under baked my cookie for fear of it being dry. (and that seemed to work, as it was almost brownie like).
June 15, 2014 at 3:00 PM

Unknown said…
I made these cookies this afternoon so I had read your post already and I underbaked as well to be on the safe side. I found the cookies a little bitter, but I guess that's to balance out the sweetness of the caramel. Pretty cookies though!
June 15, 2014 at 3:16 PM 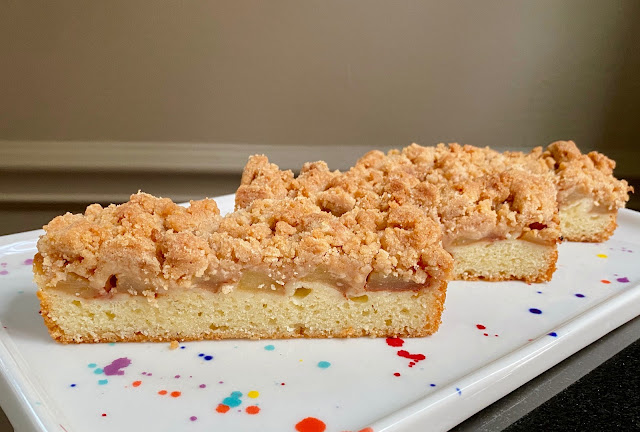 The pandemic has changed up my farmers market schedule -- I no longer frequent the downtown markets that were convenient to my office, as I haven't set foot in my office since March 2020. While there are still plenty of markets in upper Northwest DC that are easy enough for us to get to, I've also started occasionally visiting a market in Arlington, VA; I recently stumbled upon it because it's close to the house of friends I often visit during the weekend. It turns out that one of the vendors at the Arlington market is an orchard in MD that has an excellent selection of apples -- and it's the same orchard that has a stand at the mid-week market closest to my office where I regularly purchased apples. And so this is a long way of saying that I was finally able to get a hold of Calville Blanc apples again in the fall after not having a source since the 2019 season.     With my Calville Blancs in hand, I decided to use them in the " Big Apple Crumb Cake " from Sm 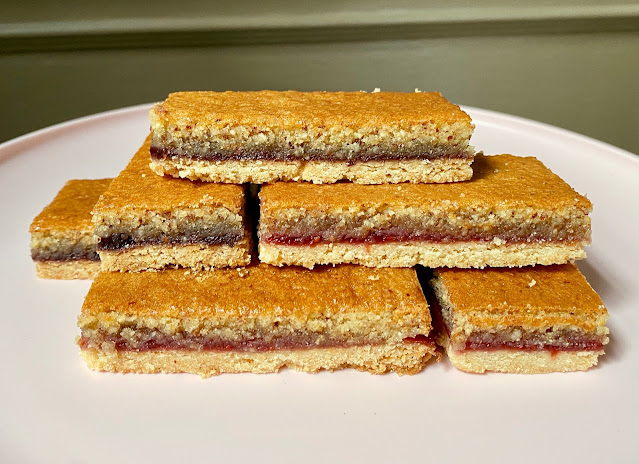 A Cookie, A Bar, or a Petit Four: Almond Raspberry Bars

Helen Fletcher says that her "Almond Raspberry Triangles" were one of the most popular petit fours at her bakery, but points out that they can be served as cookies, bars, triangles, or petit fours. The bars have raspberry jam sandwiched between a shortbread crust and a flourless almond topping.  The crust is simply a mixture of flour, sugar, and butter that can be made in a mixer (with softened butter) or a food processor (with cold butter). You press the crust into the bottom of a lined pan and bake it until golden. You spread raspberry jam on top of the crust, and I made one batch with raspberry preserves and another batch with black raspberry preserves. You make the topping in a food processor by grinding toasted almonds with sugar (I just used almond flour); and adding eggs, an egg white, salt, Amaretto, vanilla, almond extract, and melted butter. You spread the topping over the jam and bake the bars until the top is golden brown and set. I cut my bars into rectangles and 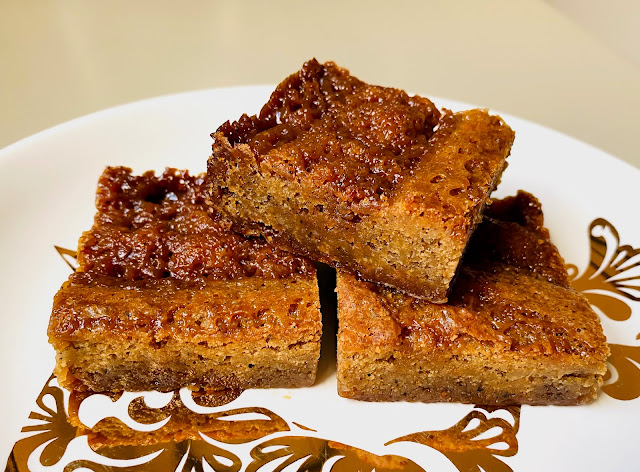 Caramel Through and Through: Black Tea Blondies with Caramel Swirl

I don't type out recipes in my blog (I mean, I'm an attorney, so there is that whole copyright thing), but I do try to link to websites that have reprinted recipes with the author's permission. Sometimes the recipes are reprinted in very random places. When I made Benjamina Ebuehi's Lemon, Ricotta, and Thyme Mini-Loaves , I found a copy of the recipe printed in the Minneapolis Star Tribune . But that find included a real bonus, because the Star Tribune printed several other recipes alongside it, including one for "Black Tea Blondies with Caramel Swirl" from from Tartine: A Classic Revisited . I still had some Earl Grey tea leftover after making Yossy Arefi's Chewy Earl Grey Sugar Cookies and the idea of combining tea and caramel seemed so intriguing, so I had to give the recipe a try. (And while I own the first Tartine cookbook , I don't own the Revisited one, so I wouldn't have come across this recipe otherwise.) First I made the caramel sauce. 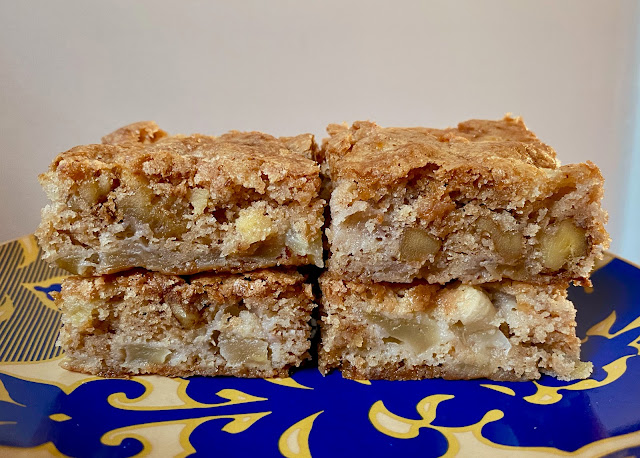 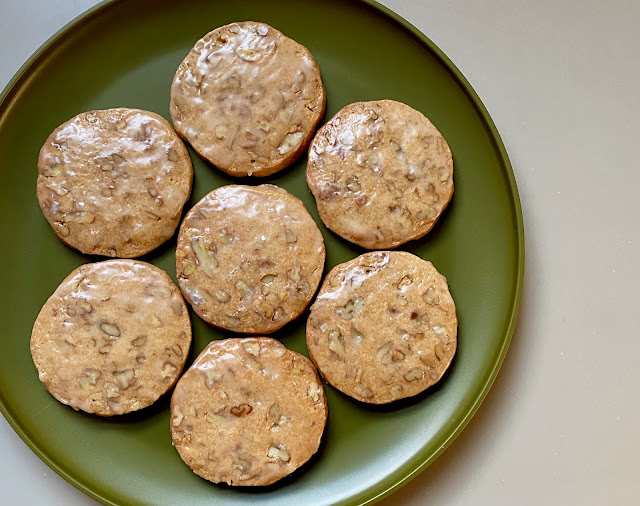 When I saw the photo for Carole Walter's " Glazed Maple-Pecan Cookies ," I didn't think they looked particularly impressive, but I figured that a maple cookie was perfect for fall. And I love a slice-and-bake cookie that can be prepped in advance.    This recipe requires both a food processor and a mixer. You use the food processor to blend together white sugar, dark brown sugar, and maple flavoring (I get mine from Beanilla ). Then you switch to the mixer: you beat softened butter until creamy and gradually add the maple sugar; add an egg, maple syrup, and vanilla; incorporate flour, salt, and baking soda; and mix in chopped toasted pecans. You form the dough into logs and chill them until firm. I left my dough in the fridge for 24 hours.   The next day, I sliced the cookies and baked them until browned. My logs of dough were perfectly round after chilling (I had put cake rings around the logs to preserve their shape and prevent the bottoms from flattening out), so I 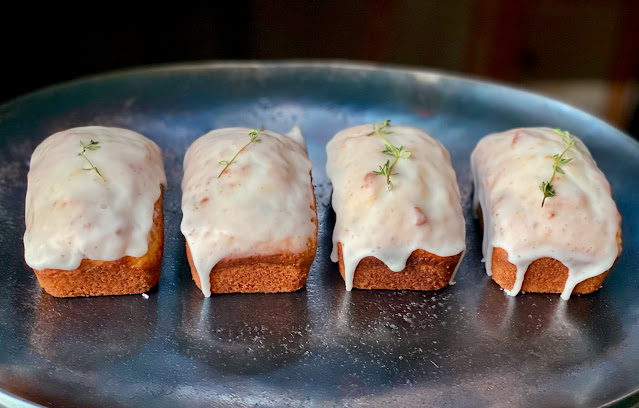 I have so many cake pans that they are stored in my kitchen, on shelves in the attic (thank goodness we have a large finished attic accessible through fixed stairs), and in numerous bins in the basement. From time to time I've downsized my collection, by giving pans away to friends or donating them to charity. Fortunately, for some reason I held onto a pan with eight mini-loaf cavities that turned out to be perfect for Bejamina Ebuehi's "Lemon, Ricotta & Thyme Mini-Loaves."  This recipe is simple and doesn't require a mixer. You rub lemon zest into sugar until the sugar is moist and fragrant; stir in chopped fresh thyme; add oil, ricotta cheese, and eggs; and incorporate flour, baking powder, and salt. I divided the batter between the eight pan cavities, which I had buttered and lined with parchment paper. The cakes released effortlessly and just fell out of the pan. After they were completely cooled, I dipped the top of each cake in a glaze made from lemon ju 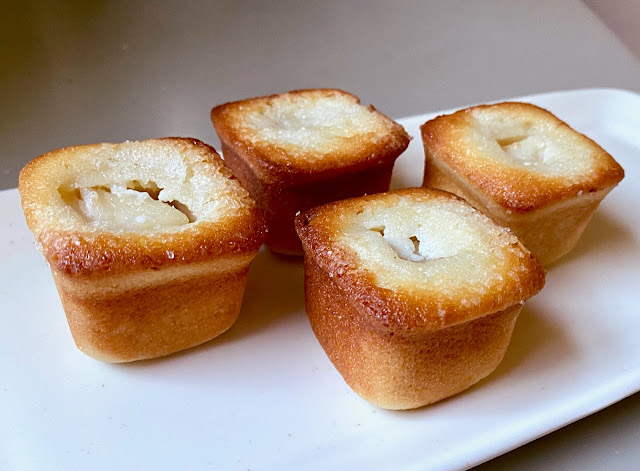 After picking up some beautiful Bartlett pears at the farmers market, I looked for a pear recipe in Nicole Rucker's fruit-focused Dappled cookbook and found her "Pear Financiers." The recipe seemed like a great way to use the pears, as well as a good opportunity to use my new USA Pan brownie bite pan . I do own some silicone financier molds but I really dislike baking in silicone.  This recipe comes together quickly and the batter doesn't require any resting time. You mix sugar with flour, almond flour, and salt; add egg whites and honey; slowly stream in cooled browned butter; and beat the batter until it's thick and glossy. I used a #40 scoop to portion out the dough into the cavities of the brownie pan (I had enough batter to make 33 financiers, so I bake two batches seriatim since I only have one 20-cavity pan ) and placed a cube of Bartlett pear in the middle of each financier. I sprinkled the tops of the cakes with sugar before baking. These little cakes we 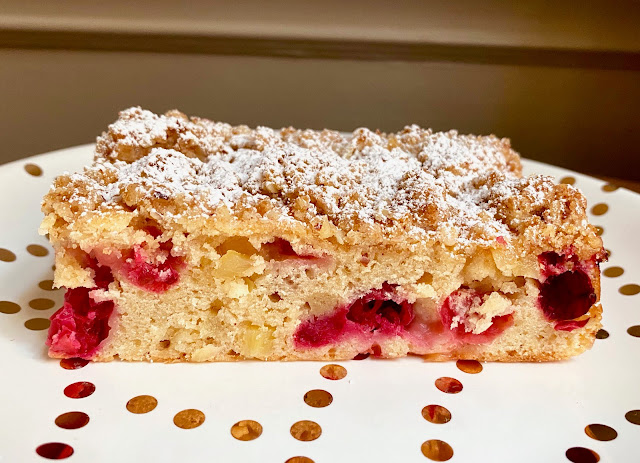 What Happens When You Make a Cake Like a Scone?: Cranberry and Candied Ginger Buckle

I can't remember where I came across the recipe for a " Cranberry and Candied Ginger Buckle " from Milk Street , but I love candied ginger in basically anything, so I made the buckle back in November when fresh cranberries were plentiful.   The method for this recipe seemed quite unusual to me. It's a butter cake but you don't use the creaming method to make the batter. Instead, you use the food processor to cut the cold butter into the dry ingredients. You pulse cold cubed butter with flour, sugar, cinnamon, and salt in the food processor (I added a little extra salt because I was using unsalted butter instead of salted); take out all but 165 grams of the resulting crumb mixture and put it in a large bowl (the portion you take out will be used for the cake; the portion still in the food processor will be used for the crumb topping); and pulse brown sugar, sliced almonds, and more cold cubed butter into the crumbs in the food processor to complete the topping.  To 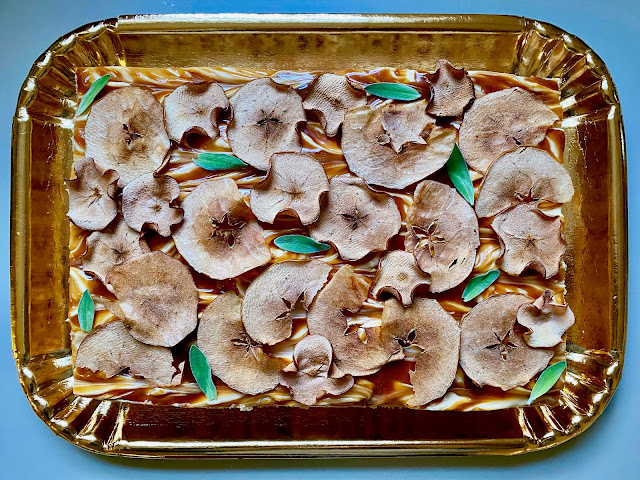 Benjamina Ebuehi says that her Apple Cake with Sage Caramel "couldn't be more autumnal if it tried," so it seemed like a perfect project for an early November bake. It's an apple cake topped with cream cheese-sage caramel frosting, finished with more sage caramel, dried apple crisps, and fresh sage. The cake batter includes a homemade applesauce you make by cooking peeled, chopped apples with a little water until softened, and then mashing the fruit lightly with a fork. I wish the recipe had provided a volume measurement for the amount of applesauce you're suppose to have, because obviously your mileage can vary depending on the size of your apples (the recipe simply calls for "2 apples of your choice" without specifying a weight). I doubled the recipe (which is written to be baked in an 8-inch square pan) to bake it in a 9-inch by 13-inch pan, and I used four small Braeburns that had a total trimmed weight of about one pound.  Once I made the applesauce 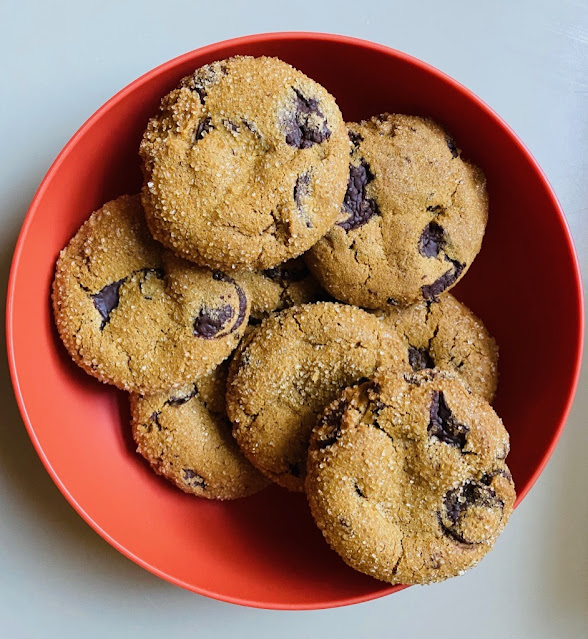 I love ginger, and I have never understood why ginger-chocolate chip cookies are not more prevalent. The combination of ginger and chocolate is so good. Edd Kimber's " Chocolate Chip Molasses Ginger Cookies " looked delicious, but I was initially deterred by the text in the headnote describing these cookies as "soft." I interpreted that to mean "cakey," which is my least favorite cookie texture. But the headnote also says that "if you are one of those people that prefer a chewy gingerbread cookie you can use a 50/50 blend of plain and bread flours," so I decided to give that a go.   You start out by heating the butter with molasses and brown sugar (I used regular brown sugar instead of muscovado) until the butter melts and the sugar is dissolved; letting the mixture cool; and whisking in eggs. You combine the remaining ingredients (all-purpose flour, bread flour, baking soda, salt, freshly grated ginger, ground ginger, cinnamon, and freshly g