August 21, 2012
Thanks to the largesse of a colleague with a fecund fig tree who lives nearby, I recently brought home an ample supply (over eight pounds) of beautiful figs. I had a recipe ready -- "Fig Frangipane Tart." I have made fig-almond tarts before, but I liked the fact that this recipe had the figs baked into the frangipane, instead of just laid out on top as a separate element.

The crust for this tart can be made in the mixer or the food processor. I used the food processor, since it was faster. You put flour, sugar, and salt in the food processor, and pulse while you add add chunks of chilled butter, more flour, and finally ice water. When the dough comes together, you form it into a disk and refrigerate it before rolling it out and lining the tart pan, followed by chilling, docking, and blind baking the crust. This dough was very easy to handle and the unbaked crust was flawless, although it did shrink a bit during baking despite my using pie weights. I also had to bake my crust for 20 minutes (twice the directed time) before it took on any color around the edges.

You fill the partially baked crust with a frangipane almond cream made by grinding almonds, sugar, eggs, vanilla, salt, butter, and lemon zest in the food processor. You arrange quartered figs on top of the frangipane, pressing them into the mixture. You bake the tart until golden, and while it's still warm, you brush some thinned and heated honey onto the fruit so that it glistens. 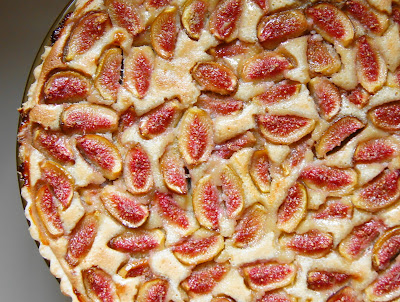 The tart looks nothing like the one in the picture accompanying the recipe in the Los Angeles Times, but only because the figs from my friend's tree are small and green (the skins turn purplish-brown when ripe) with pink interiors. 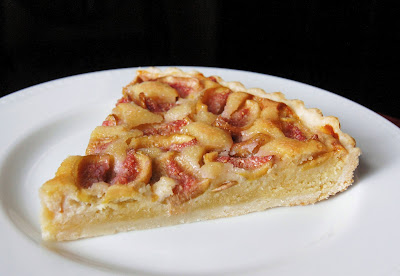 The crust turned out nice and crisp, and the frangipane was rich and deliciously almond-y, with a lovely brightness from the lemon. My only complaint about this tart is that the flavor in the almond layer was so strong that it overpowered the figs; this particular variety of fig is very sweet, but also quite delicate. As a result, the tart wasn't very "figgy."

I'm such a big fan of almonds that I don't think I've ever met a frangipane tart that I didn't like -- and I'm sure this tart would be delicious with just about any type of fruit. That said, this recipe probably wasn't the best choice to showcase the mild flavor of these beautiful little figs. But I enjoyed every bite nonetheless!